Creating a Super Bowl ad is likely the toughest assignment that exists in the world of advertising. The dollars are substantial, the expectations are even higher, and the sweaty palms of nervous clients can’t be forgotten. The fact that the event is now known for the commercials as much as it is for the game has certainly helped create a playing field where all contestants at least understand the ground rules that will lead them to success.

With the general consensus being that this year’s game itself was a snooze, it was up to the ads to captivate the millions who tuned in. Did they score or turn it over by way of a costly fumble? Several of our associates give their take on Sunday’s winners and losers.

The general consensus on the Super Bowl this year was that the only thing less interesting than the spots was the game itself. While that’s a matter of personal opinion, there are a few fascinating nuggets of intel from the early data. The last several years there have been few differences between the national scores and the scores of the 65+ audience. This year there was more disparity. The senior audience was much more impressed with the emotionally driven spots like Microsoft’s “We All Win” and Verizon’s “The Coach Who Wouldn’t Be There.” Several spots in their top 10 were outside the national favorites.

However, humor still ruled the day, as the highest-ranked spot for 65+ mirrored the national scores — once again the NFL “won” their own media party, taking the top spot with their fantastic “100-Year Game.” It had something for everyone and remembered what it was meant to do — entertain. It featured Fortnite video game master, Ninja, for the kids, and the hottest young players of today with legends of the past. Personally, I loved the opportunity to tell my son about Dick Butkus, Joe Greene, Joe Montana, Jerry Rice, Larry Csonka, Barry Sanders and more. The spot captured the joy of the game from those who play it best and love it most — including Sam Gordon, Sarah Thomas and Beth Mowins, who are challenging the notion of gender in the game. While the NFL has had its share of public relations issues the last few seasons, this spot bridged the divide between race, gender and age.

It’s easy to see why this spot was the highlight in an otherwise uneventful evening — and it’s worth noting everyone who starred in the spot volunteered their time — none of them were paid. They were there because they wanted to be — and the joy shined through in doing what is so difficult to with advertising — appeal to everyone.

Olay made its Super Bowl debut with “Olay Killer Skin,” a horror movie spoof featuring a woman hiding from a masked killer in her home. She tries to call 911, but the facial recognition feature on her phone doesn’t work because she’s been using Olay and no longer looks older and sad.

So, this fun little scenario is not so subtly communicating that looking older is scary.

Olay says they want “all women to be bold and empowered.” Considering that nearly half the NFL fanbase is women, that women over age 50 account for more than 27% of all consumer spending, and that these older women spend 2.5 times as much as the average consumer, Olay might have done something smarter than associating horror with aging skin.

To empower a lot of women with money to spend, they could have showcased older women with beautiful, glowing skin – with wrinkles, even! – and focused on embracing who you are, taking care of yourself, being confident at any age. Because there are plenty of Boomer and senior women proving every day that aging doesn’t have to be a horror show. Saying otherwise is a disservice to all their consumers, and it’s quite possibly leaving money on the table.

My preferential bias for Super Bowl commercials has always focused on the gift of gab – or in my case, the ability to communicate and entertain with as few words as possible. If the visuals and character interactions are executed well, then less is more when it comes to dialogue. The gold standard was set by Volkswagen with “The Force” back in 2011. Based on this criteria, Burger King came closest this year with their “#EatLikeAndy” campaign that featured Andy Warhol eating a Whopper.

Even though I appreciated the simplicity of the Burger King ad, I was struck by a recurring theme of loud and clear dialogue woven into several of this year’s Super Bowl ads. Try as I typically might to dismiss all candidates who speak, the women who voiced strength and empowerment were the winners this year.

There was Serena’s call for women to make the first move in Bumble’s “The Ball Is in Her Court” ad. Then there was Toyota’s challenge of assumptions in their “Toni” ad (featuring a cameo of their RAV4 Hybrid). And there was the NFL’s “100-Year Game” ad, which let fans bypass a room full of NFL greats delivering some stellar one-liners so they could discuss the concept of the first female player in the league. All in all, this year’s MVPs were the ones that challenged our perceptions.

As a lifelong football fan, I’ve always looked forward to the Super Bowl – and the commercials during the big game. Not just because the game and spots were what everyone talked about, but also because of my love and affinity for the world of video production and advertising.

Having chosen a career behind the camera, when I watch the commercials, I find myself picking everything apart. This year provided much fodder for me to be critical. In short, I feel like the commercials for the big game were disappointing. Maybe it’s because I saw so many of them before the game, a change from past years that I find odd. We used to sit and look forward to the unknown. Now, we already see most of the commercials a week ahead of the game. Couple that with some serious swings and misses, and it just wasn’t a great viewing experience. Sunday truly made me long for the days of old. Gone seem to be the days that Super Bowls would be highly contested chess matches, won at the last second by a field goal gone wide right, and commercials that made us laugh, think, or become excited for what the future held. Instead, we watched commercials like “Change Up the Usual” and were all left wondering why “The Dude” would ever be in a fancy New York bar instead of a California bowling alley with his buddy Walter.

You can’t comment on this year’s Super Bowl ads without at least touching on what all transpired before the big game. First, you had the controversy surrounding athletes taking a knee during the singing of the national anthem. More recently you had two big national advertisers – Gillette and Nike – deploying advertising messages that no doubt pleased some and enraged others. And still more recently you had artists criticizing other artists for agreeing to perform during the halftime show.

So, did this string of controversies extend to this year’s Super Bowl ads? No. Advertisers played it safe. Google’s “100 Billion Words” is a good example. Undoubtedly, the NFL doesn’t want any more controversy, and most certainly no controversy that might eclipse the game itself.

With that prelude out of the way, here are a few of my observations on the best and worst ads as I saw them:

Next week our Research team will share the results from our Senior Panel’s take on the Super Bowl ads. Find more senior living-related entries on a variety of subjects here. 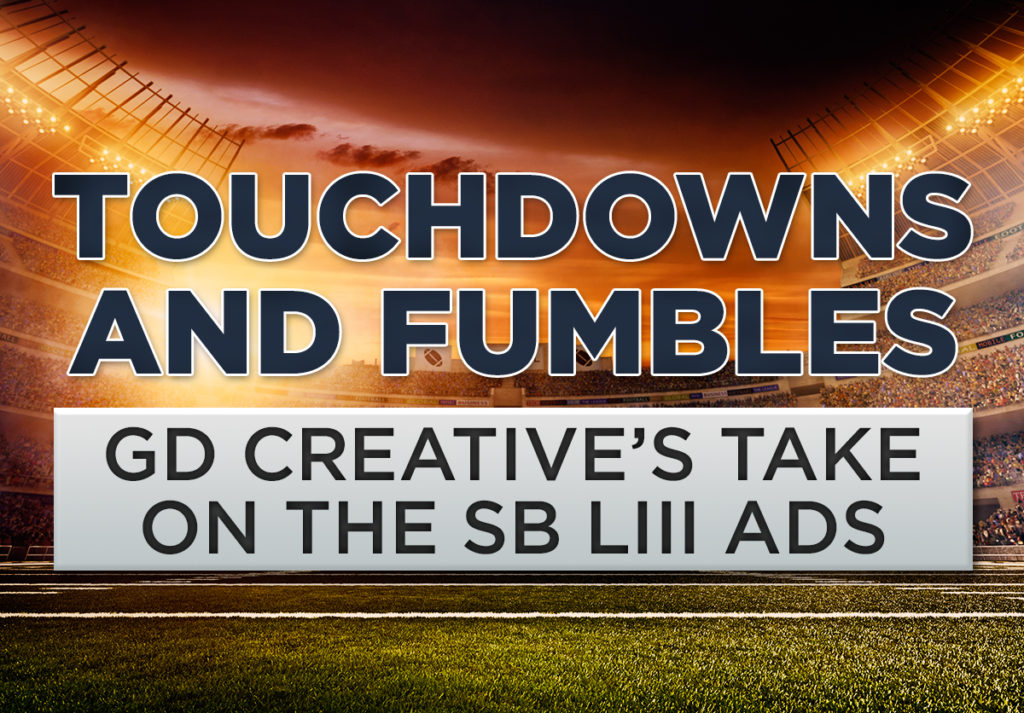